​cornwall park provides a living history of auckland and our country’s growth.

From walking in the footsteps of our ancestors or earlier generations of our families, to key sites of historical importance, you can get a precious glimpse into times past in Cornwall Park. Our heritage sites below are unique and special places to visit. 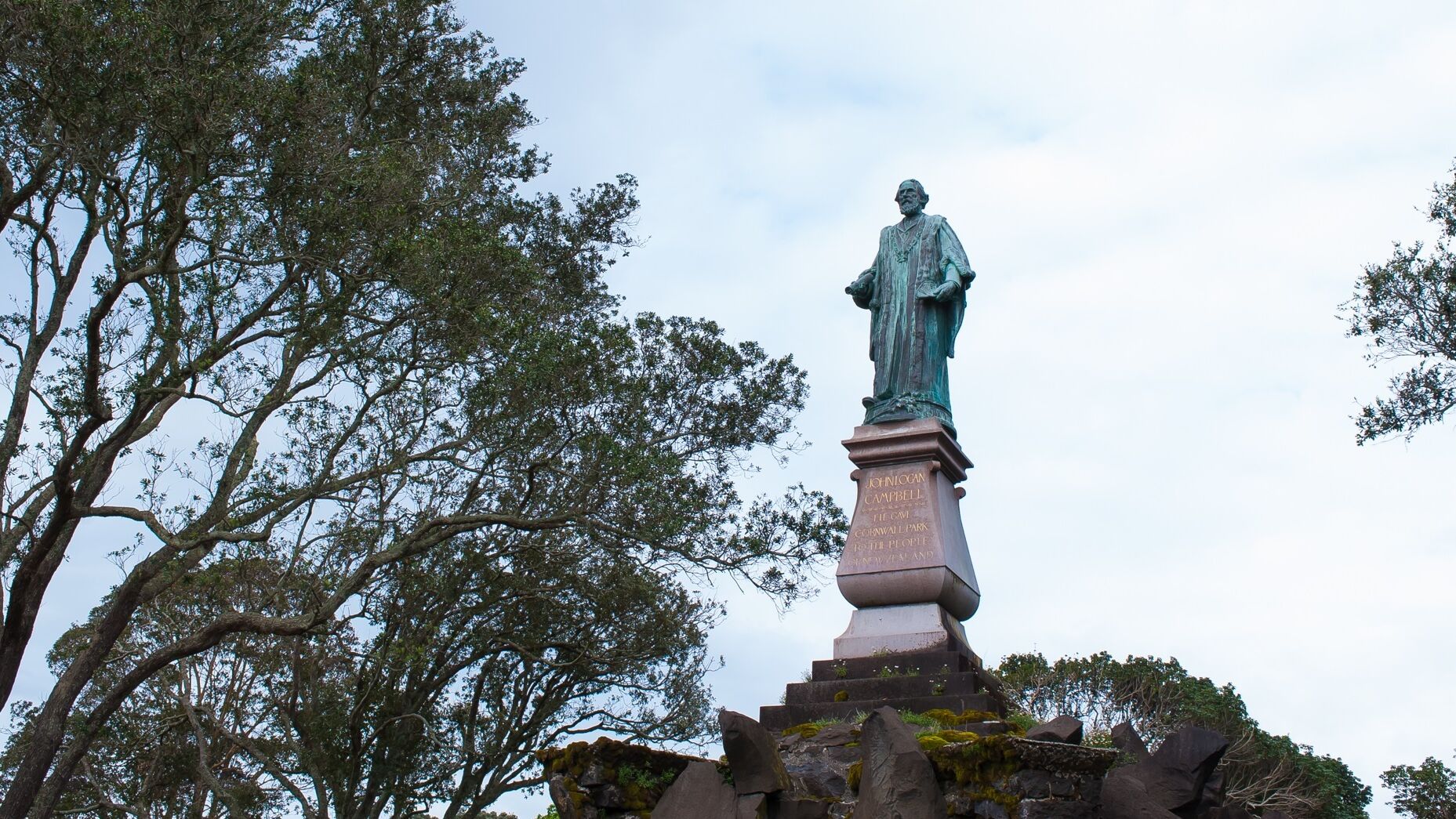 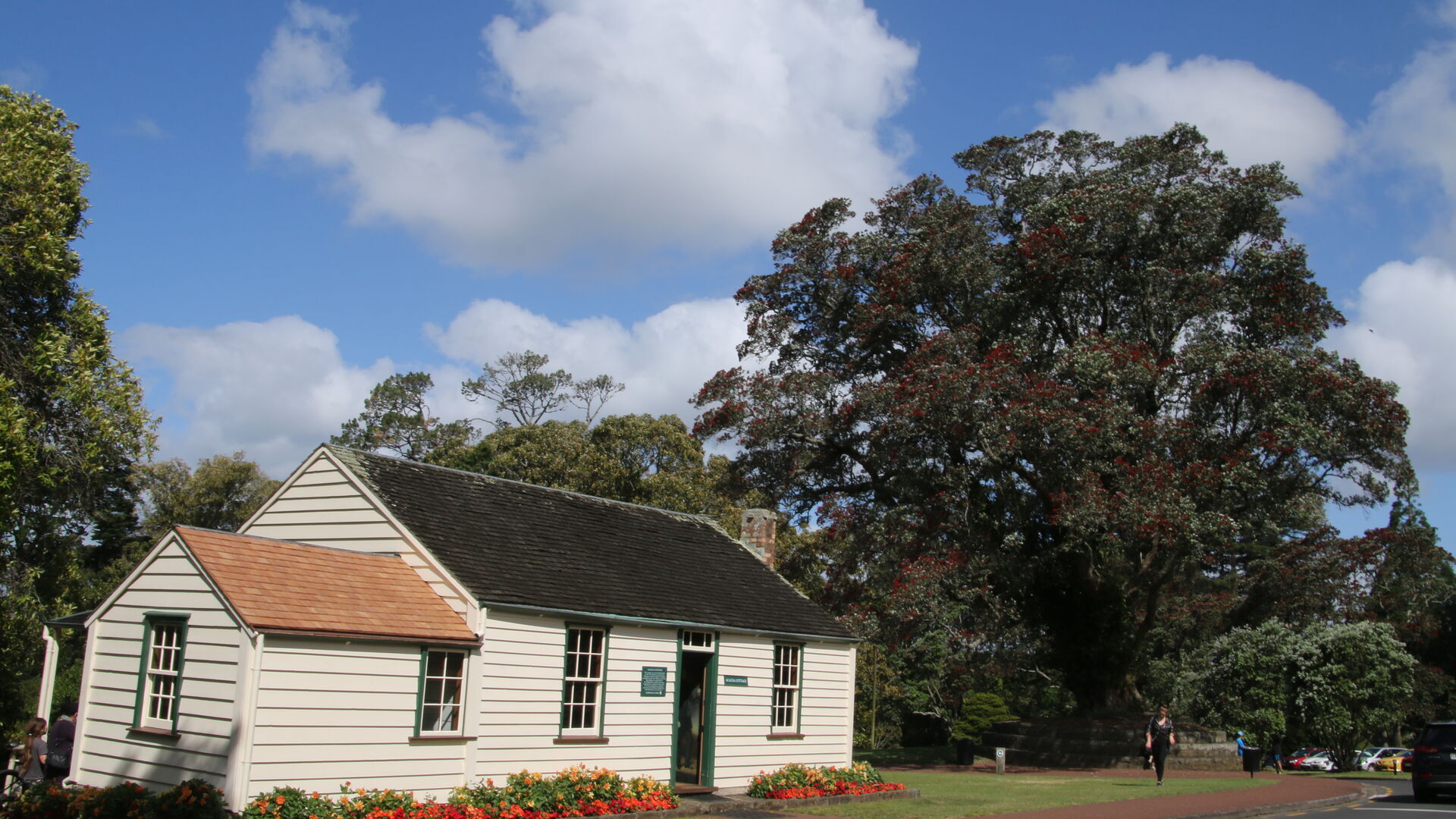 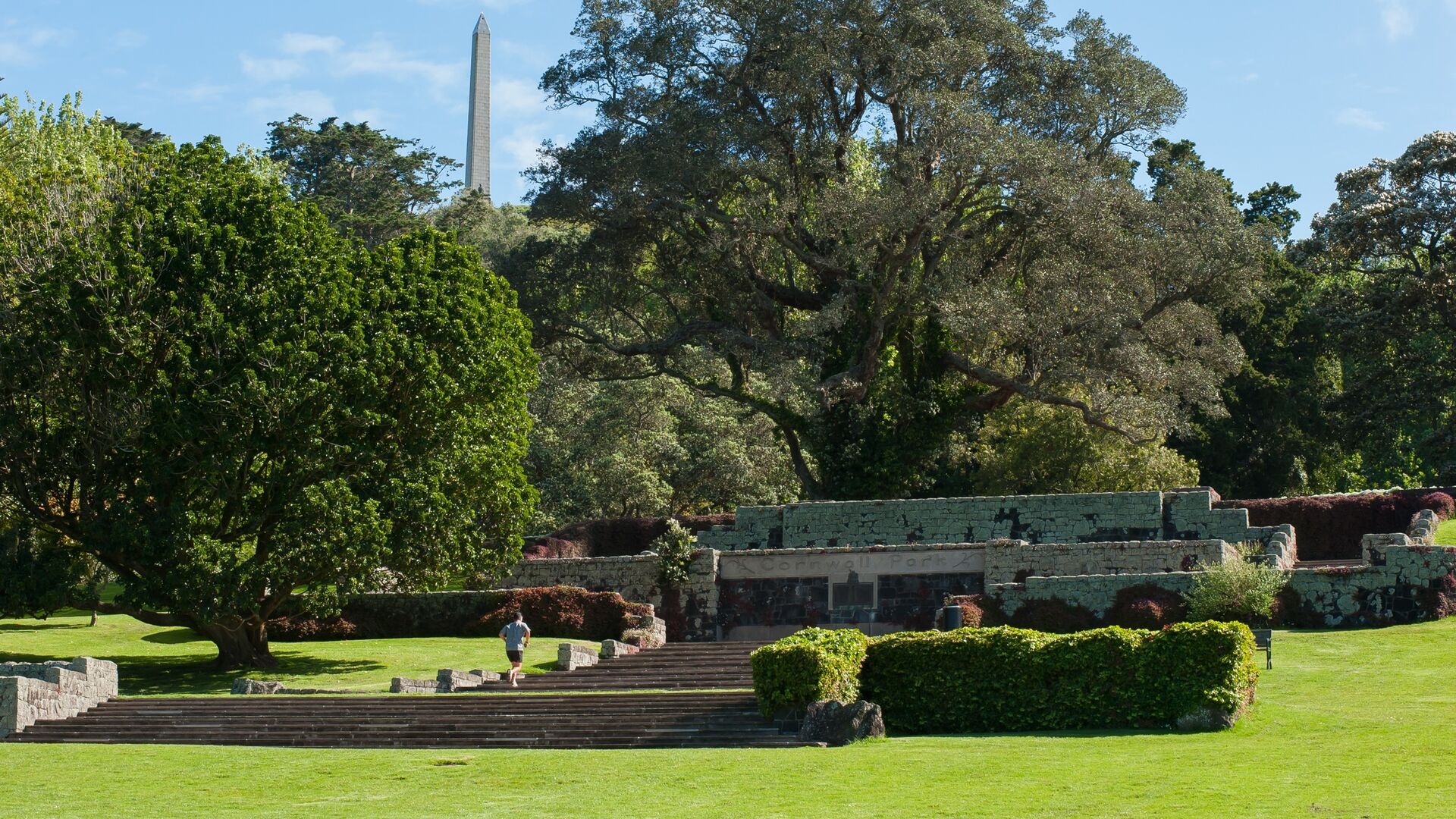 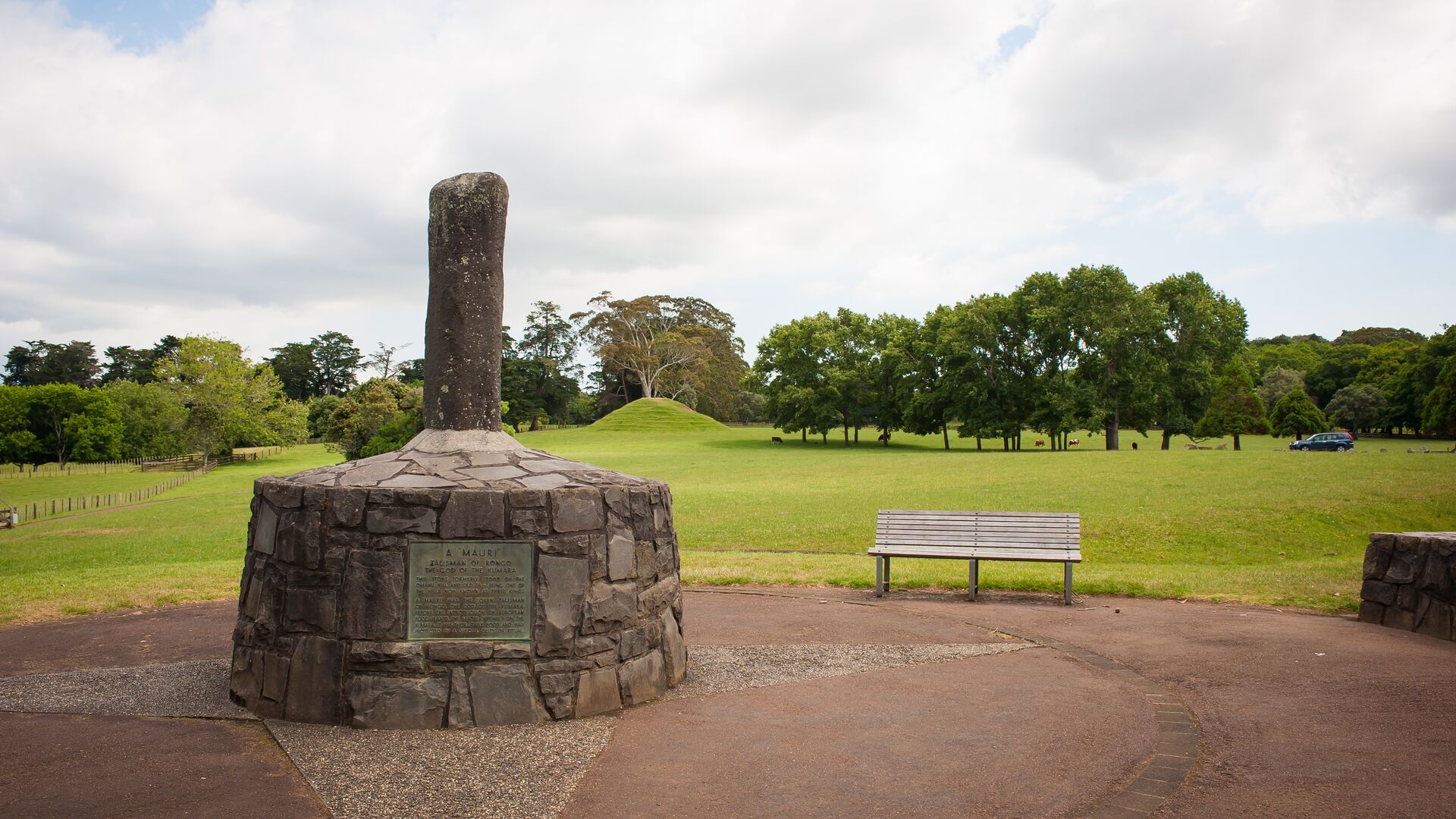 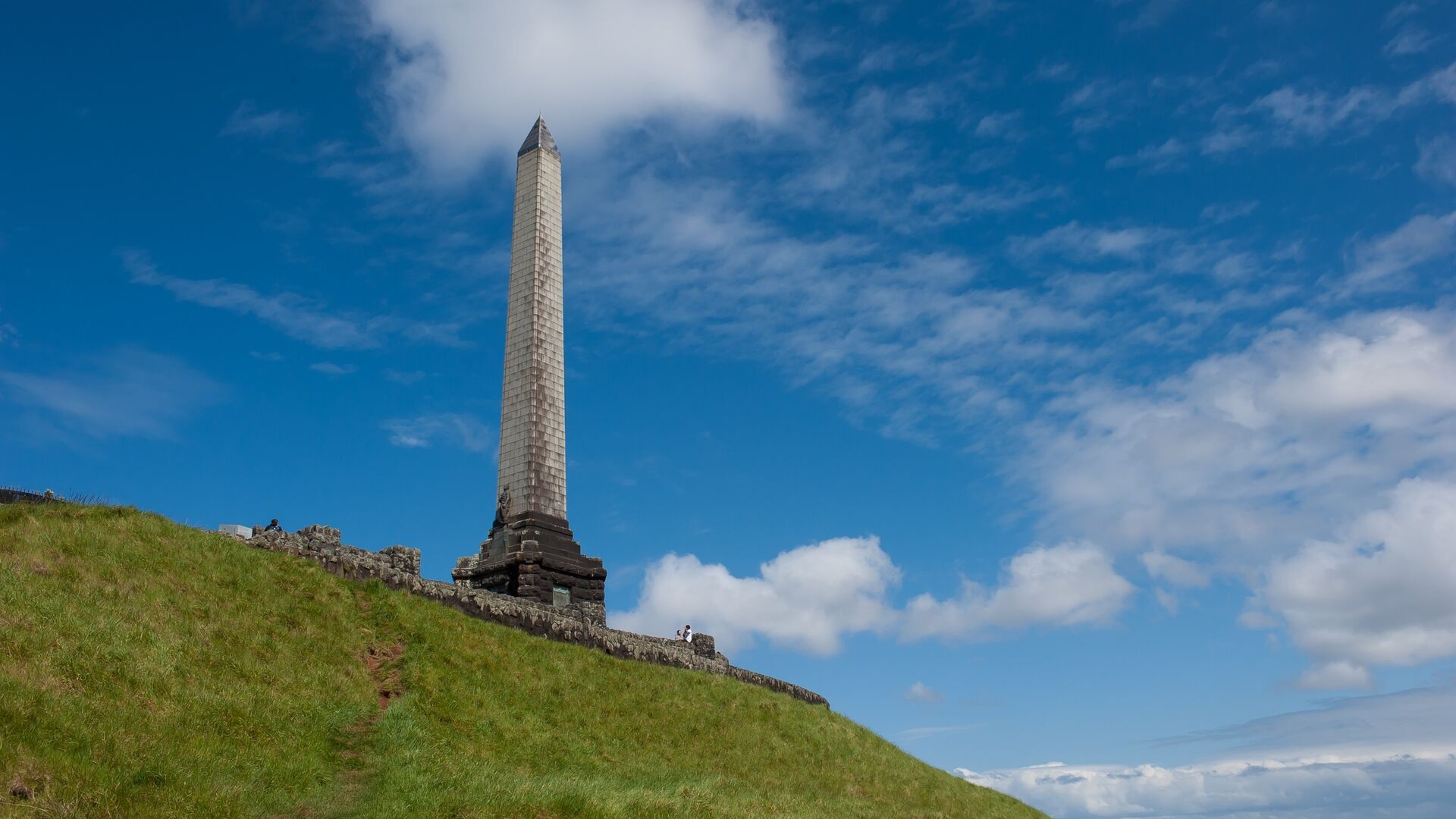 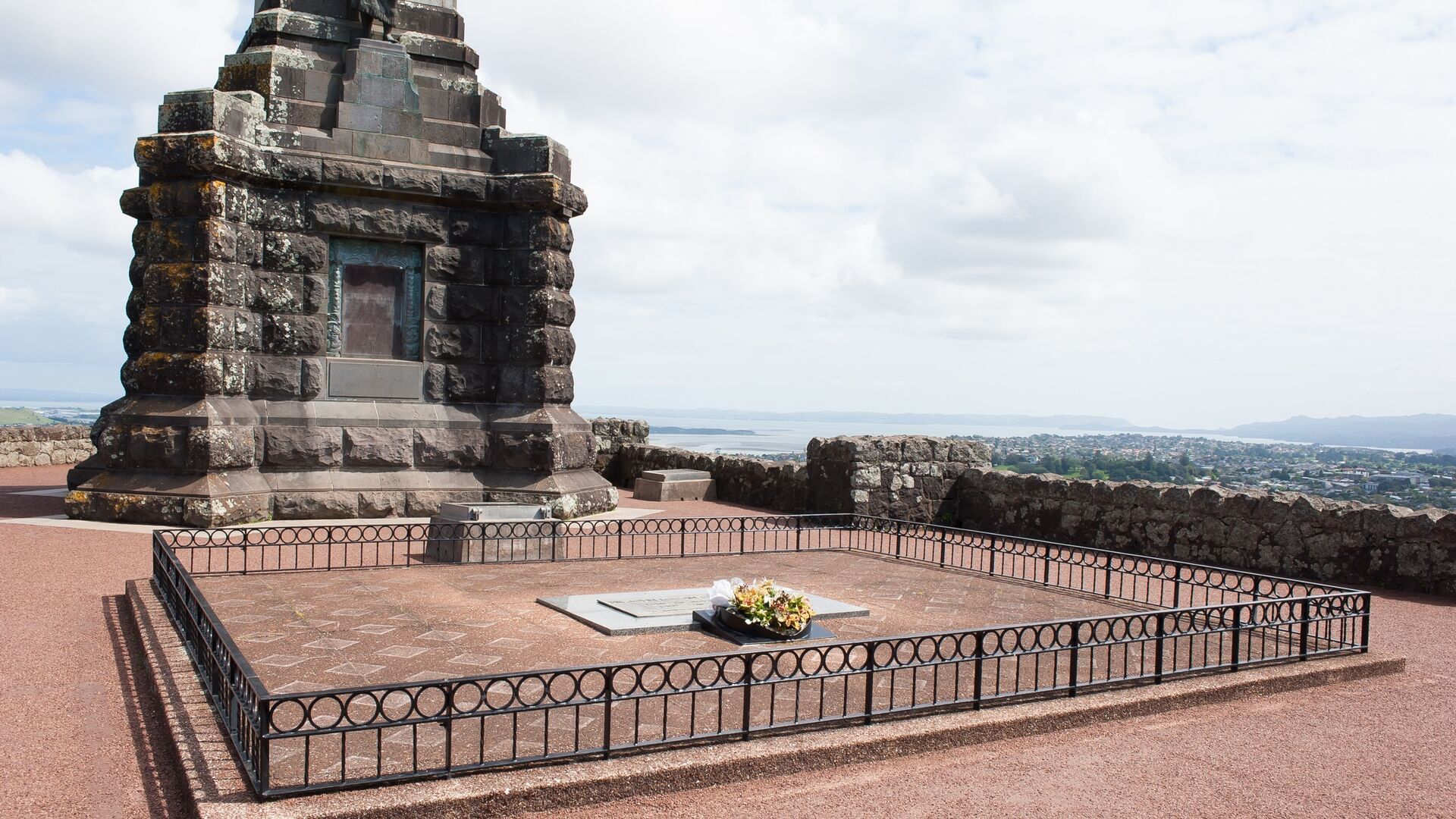 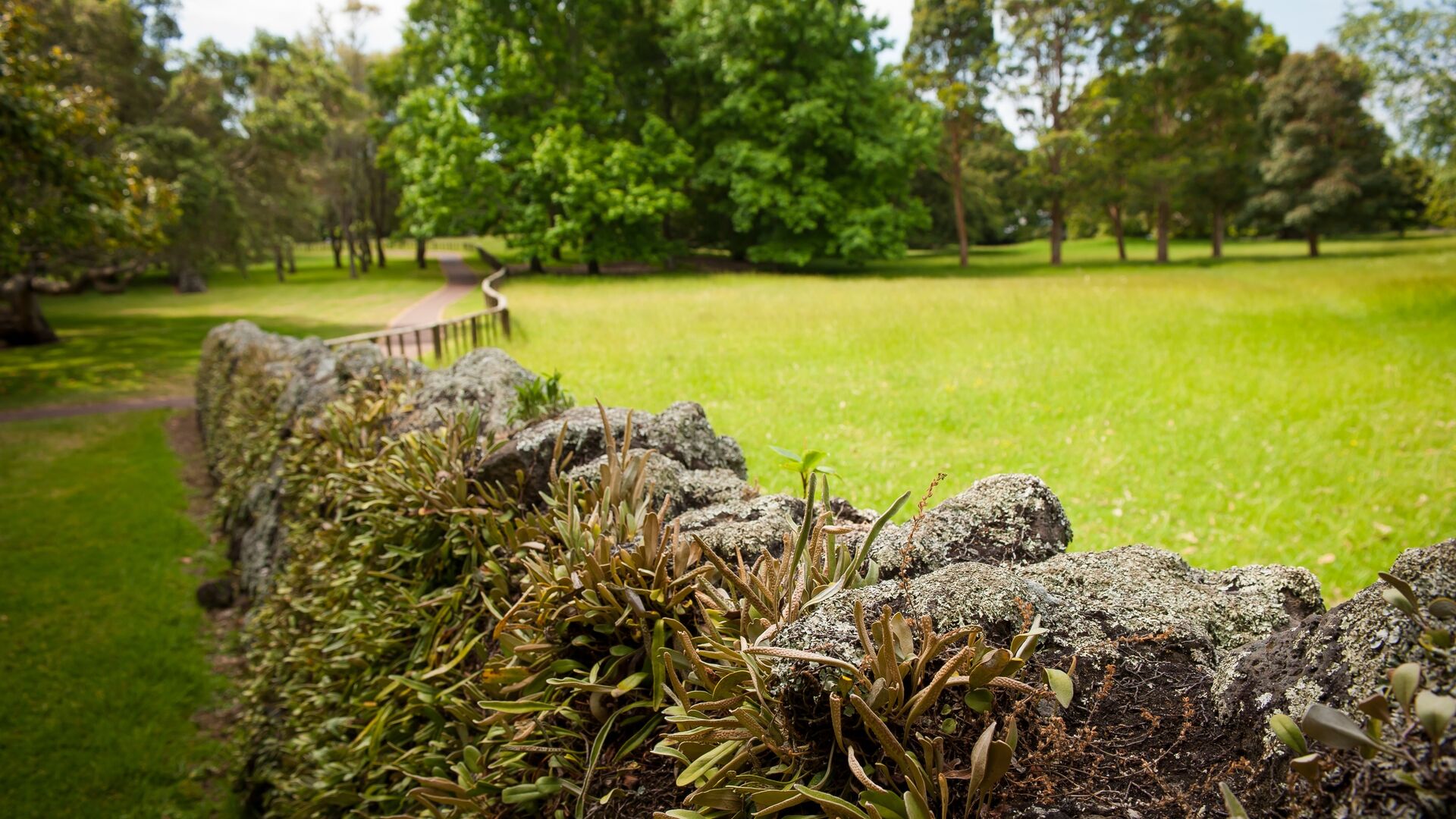 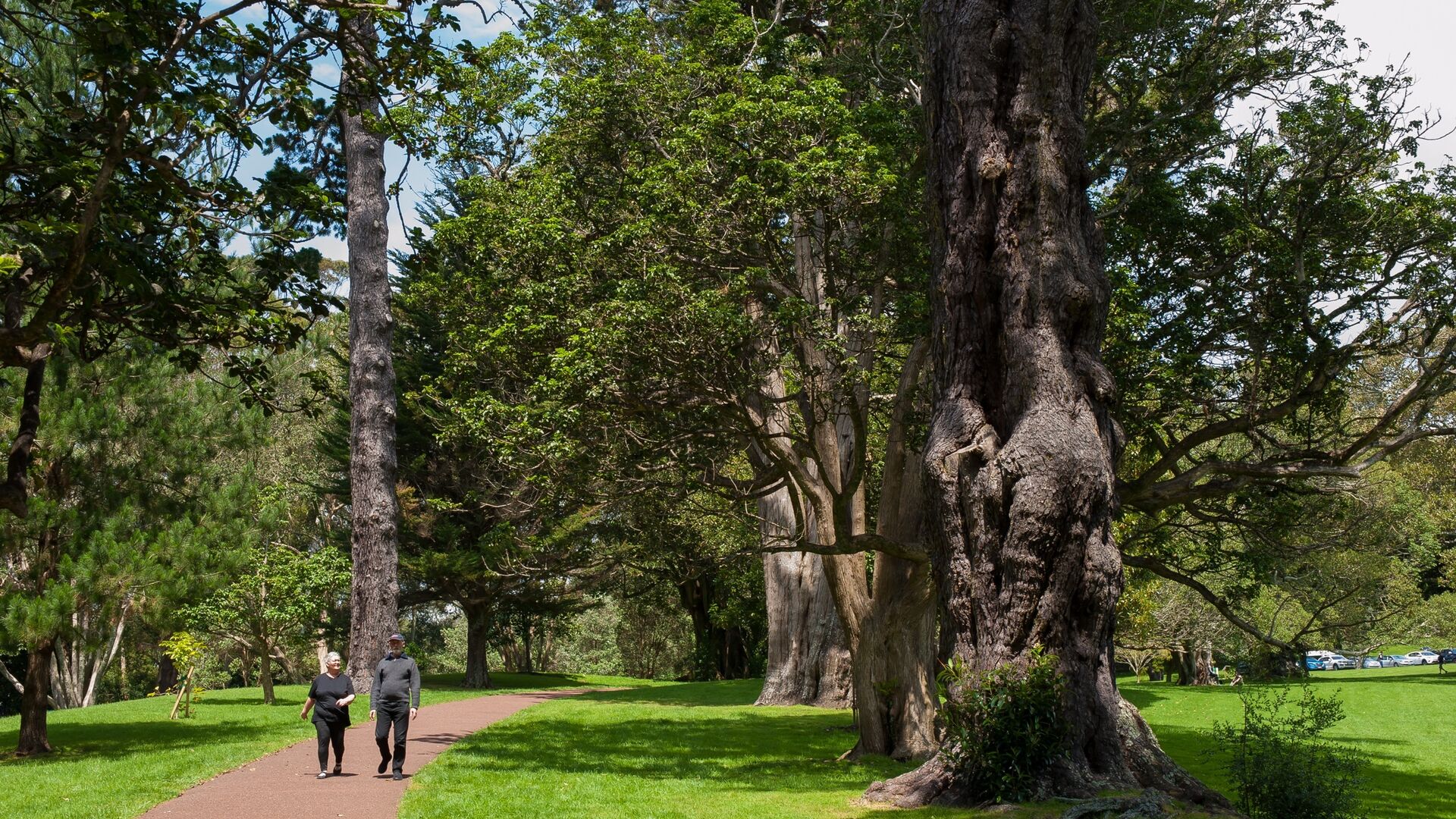 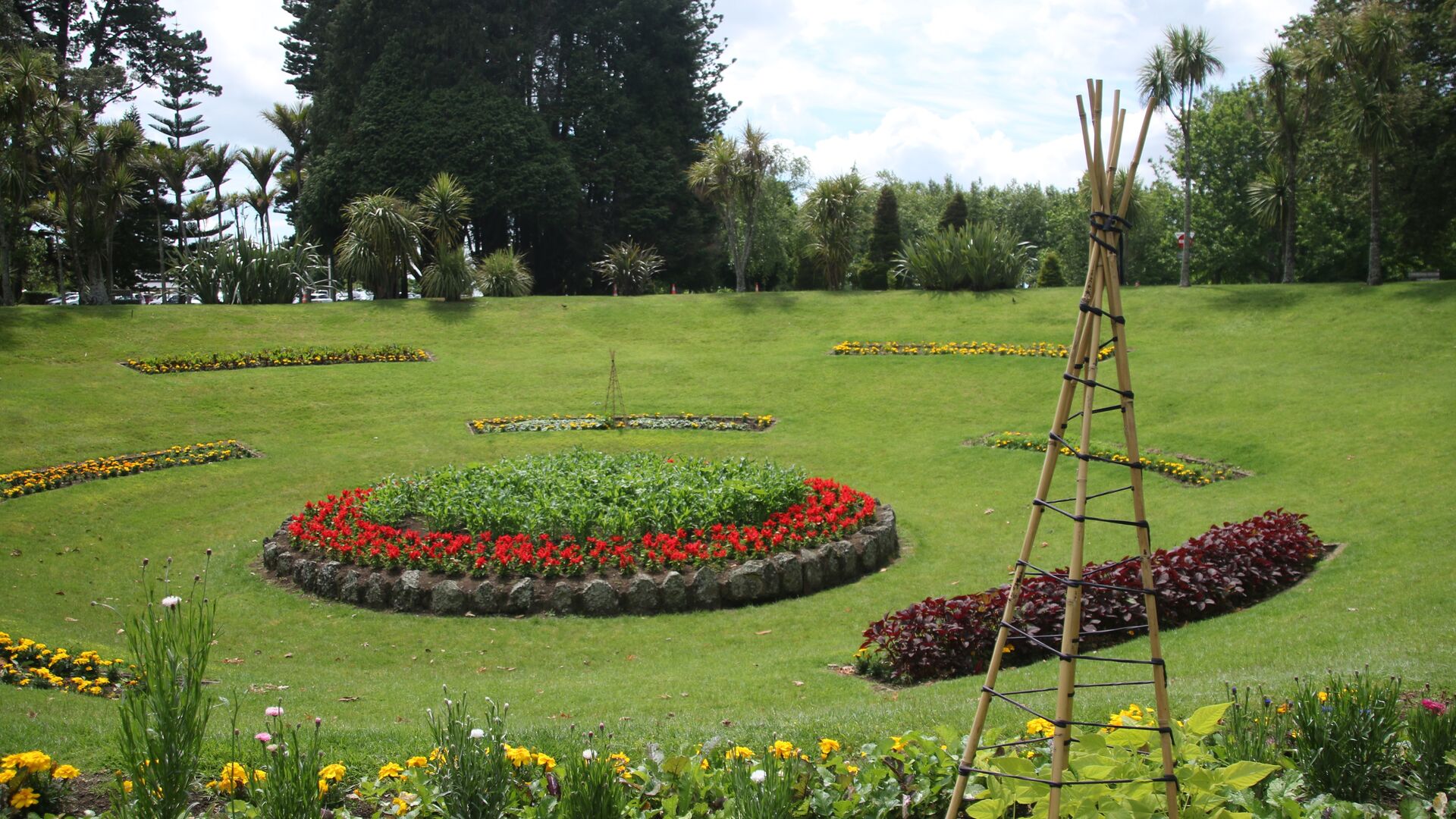 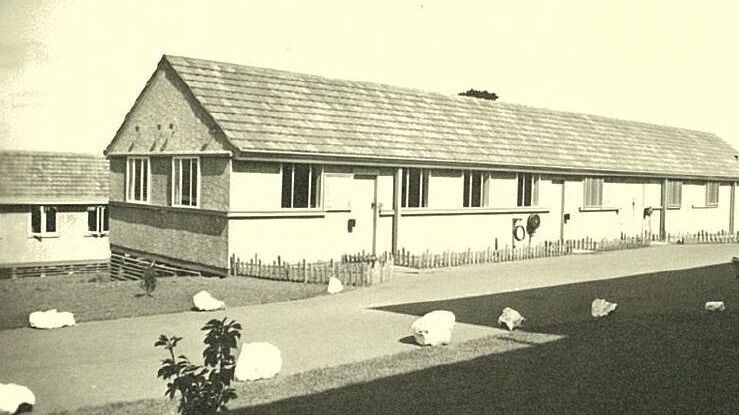 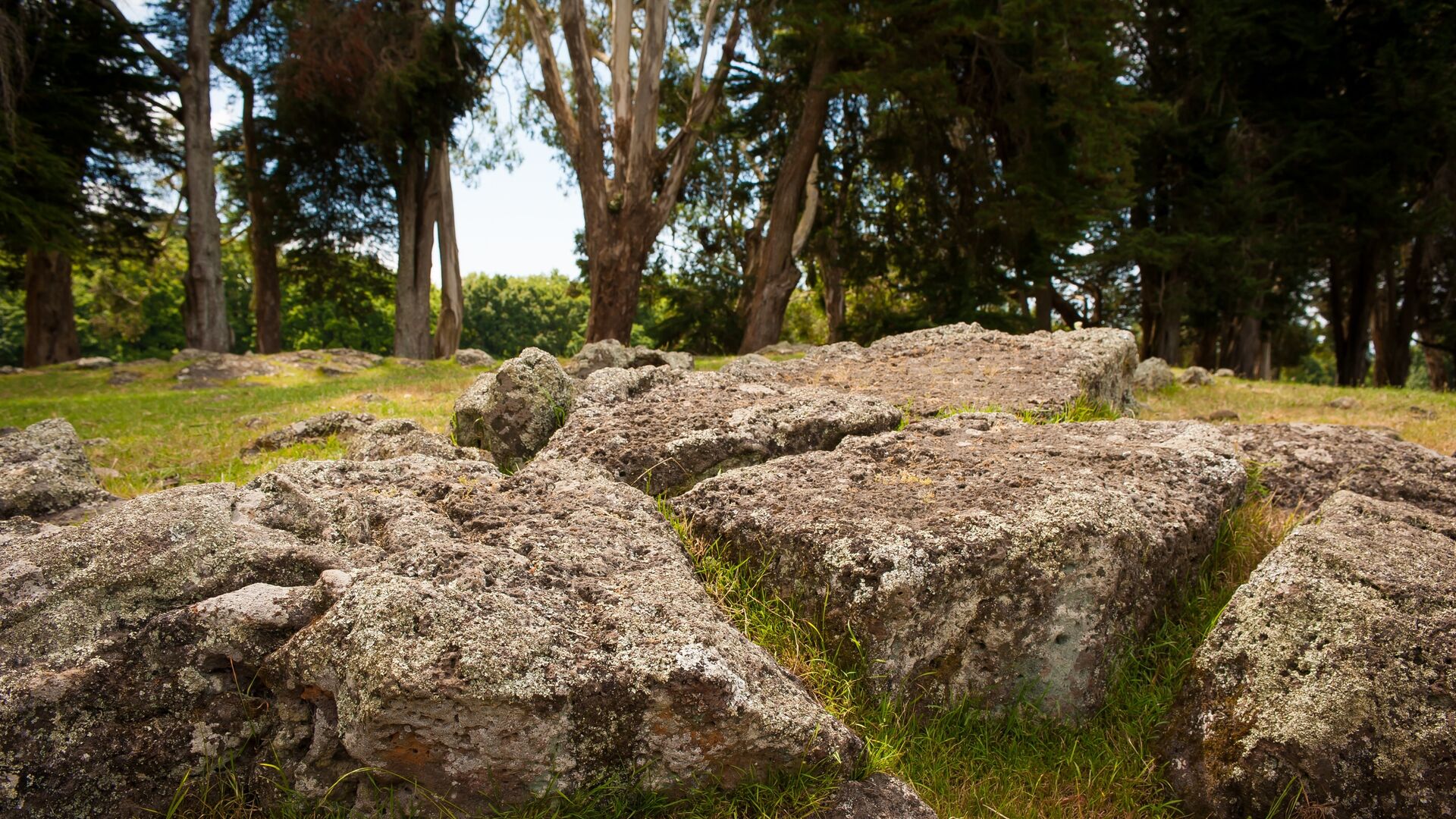 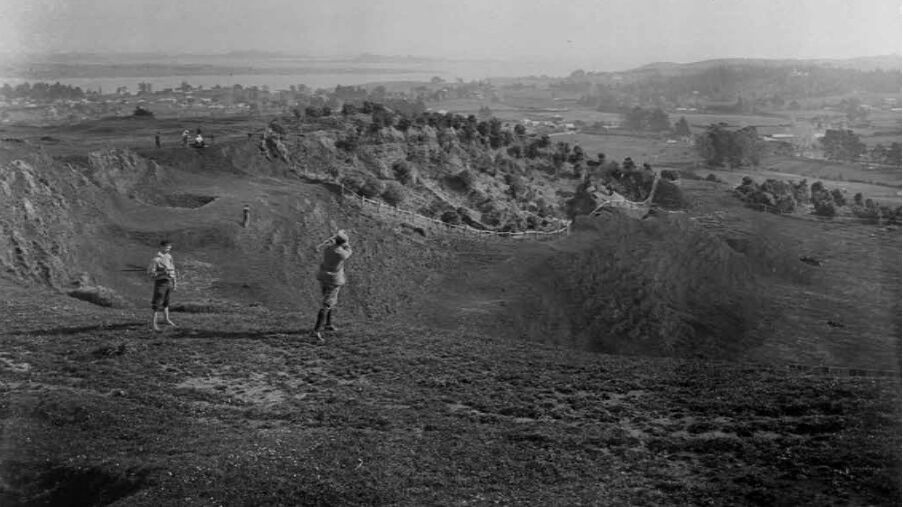 The statue of Sir John was unveiled on Empire Day on 24 May, 1906 on Campbell Crescent. It depicts Sir John in his mayoral robes at one-and-a-half-times actual size, holding the Deed of Gift of Cornwall Park. The statue, which was paid for by grateful members of the public, was modelled and cast in bronze by Henry A. Pegram in London, and set on a base of huge blocks of Mt Eden stone. The pool and statue base were designed by Charles Le Neve Arnold, the architect of Huia Lodge, and the fountain playing at its base completes the impressive structure. It was placed at the entrance to the original carriage-way lane into Cornwall Park from Manukau Rd. Sir John spent a considerable amount of money to ensure that Market Rd could be diverted and a large, semi circular ante-park created for the statue and to serve as the formal entrance to the park. Campbell Crescent has recently undergone a major refurbishment.

Acacia Cottage is Auckland’s oldest surviving wooden building, and was home for families associated with Brown & Campbell Co. Sir John sourced the kauri timber for the cottage from Northland, co-ordinating a small schooner to deliver it to Auckland. The house was originally located on Shortland St in Auckland City next to Campbell and Brown’s business headquarters. Campbell used his own carpentry skills to complete the interior of the cottage himself after builders had raised the frame. The house was moved to the park in January 1921 and restored for members of the public to enjoy. Get a taste of life in the 1800s as you walk through the rooms, or sit on the porch and take in the lovely views.

The Memorial Steps below Acacia Cottage were constructed in 1956 in Sir John's memory. This spectacular flight of stone steps was designed by prominent New Zealand architects William Gummer and Reginald Ford. A bronze plaque set into the stonework of the steps records Sir John's arrival in New Zealand, his association with Governor Hobson and his burial on the summit of Maungakiekie/One Tree Hill. Immediately below steps is is the Native Arboretum, planted in the mid-1960s.

Our Rongo Stone is said to be an ancient representation of the Māori kūmara god, and would have traditionally been set up in kūmara gardens to ensure a good harvest. The stone is of great archaeological significance, and was originally brought to Cornwall Park by Sir John in 1890 after being retrieved from the roadside at the foot of Te Tātua-a-Riukiuta (Three Kings volcano). This particular stone got its name because it travelled around to many different Māori settlements, finally resting at Cornwall Park. It is thought to have been originally located near Te Arai, north of Auckland. Stones such as this were often focal points of tūāhu, ceremonial places.

The obelisk was completed on the summit of Maungakiekie/One Tree Hill by 1940, the centennial year of the signing of the Treaty of Waitangi. Although it was constructed nearly 30 years after Sir John Logan Campbell’s death, it fulfilled the terms expressed in his will which he had reserved money to complete. The obelisk is situated near Sir John's grave, but it was not intended to honour him, rather it was built as a permanent record of his admiration for the achievements and character of the great Māori race. Campbell decided on the idea of an obelisk after admiring them during his travels in Egypt.The base is formed from rusticated basalt blocks and rubbed stone wedges, while the cast bronze figure of a Māori rangatira was sculpted by Richard Oliver Gross. The official unveiling of the obelisk was delayed until 24 April 1948, once World War II was over, in keeping with the Māori custom of not holding such ceremonies during a time of bloodshed. A number of dignitaries were present for the occasion, including the Māori King, Koroki, and the Mayor of Auckland.

When Sir John passed away aged 94 on 22 June, 1912, a special transfer of 2.6 hectares of land was made to the Cornwall Park trustees so that he could be laid to rest overlooking his beloved park. It was the largest funeral procession ever recorded in Auckland’s history. The inscription on his grave reads ‘'Si monumentum requiris circumspice'’ which translates as "If you need a memorial look about you". His wife Emma Cracroft Campbell died shortly after him, on 11 August, 1912.

The park contains many stone walls that have been used for different purposes throughout the years. The earliest stone walls found in both Cornwall Park and One Tree Hill Domain were historically used for gardening. When Māori first settled in New Zealand they brought with them tropical crops which struggled to grow in New Zealand’s colder climate. Kūmara, gourds, taro and yams were a few of the hardier crops that managed to adapt well. The scoria rock walls that they built around their gardens would heat in the sun, slowly warm the soil and extend the growing season by up to one month! It is estimated that this technique had been evolving for around a thousand years before Europeans arrived. When Europeans came, they too used stone walls but for sheep and cattle farming and housing. We have remnants in the park of stone walls from when the land was owned by Thomas Henry in the 1840s, before Brown and Campbell bought it in 1853. There are also wall remnants from 1942 when the 39th US Army Hospital was built on the eastern side of the park. Repairs continue to be done to maintain these important historical features.

The walking path from the cricket club gate to Huia Lodge was once known as Old Avenue and was the old horse and carriage route. Sir John planted many trees along here, including macrocarpa.

The park's design features were well thought out, and though today the Sunken Garden in the centre of our main roundabout is often missed by visitors, it originally served as a surprise viewing for those entering the park on horse and carriage and sitting up high. Today, the garden is replanted twice a year with different flowers by our dedicated nursery team and is best admired on foot.

Cornwall Park today is a place of refuge and respite for the people of New Zealand, but once upon a time it provided healthcare services too in the form of two hospitals. The eastern area of the park, where the Cornwall Park Cafe sits today, housed a hospital for US Army soldiers injured in the Pacific during World War II. Built in 1943 at the request of the New Zealand Government, once the war was over the US Army 39th General Hospital became the temporary National Women’s Hospital and Geriatric Unit while a permanent building was constructed next door. Today all that remains is the flagstaff that once flew the US flag.

Basalt outcrops from Maungakiekie/One Tree Hill can be seen at the bottom of the Rangitoto Steps. There are two different types of volcanic rock that can be found in the park, basalt and scoria. Basalt is created from lava flows and is embedded in the mountain, while scoria is thrown up by the volcano and then cools. In the western crater of Maungakiekie there are big lumps of crumbly red dirt, this is a mixture of the ash and scoria. The ash is 280,500 years old and is from the Three Kings eruption.

Among his many hats, Sir John also dabbled in a bit of golf, and was the president of the Auckland Golf Club. In 1901 the club was allowed to lease a portion of Cornwall Park for its new clubhouse and Sir John inaugurated the opening with teeing off the first shot. The arrangement was only temporary and the club moved on in 1909. Following its departure the Maungakiekie Golf Club moved in until 1943 when it became apparent that playing golf in a public park with walkers and animals nearby was not ideal and that it was damaging the maunga.